Brandon Norris, a Pirate graduate and standout, is in his sophomore year at Brevard College. In just his second year as a Brevard Tornado, he is experiencing and accomplishing things that most college athletes only dream of. 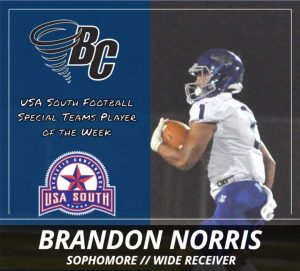 The Brevard Torndoes went 7-2 overall and 5-2 in conference this season. They tied 2nd in conference. This year they received a bid to the 2019 Eastern College Athletic Conference (ECAC) Scotty Whitelaw Bowl Championship.

Novemeber 21st, they left campus to travel to Pittsburgh, PA for their first ever bowl championship game. This was their opponent’s, Carnegie Melton University, 4th visit in the last five years to an ECAC Bowl. The Brevard Tornadoes DEFEATED Carnegie Melton to claim the ECAC Scotty Whitelaw Bowl Championship title!

Yes! Norris will receive a college championship ring in addition to all the great memories and lessons received from the experience. Congratulations to Norris and the whole team!